Ramble on Swept Away 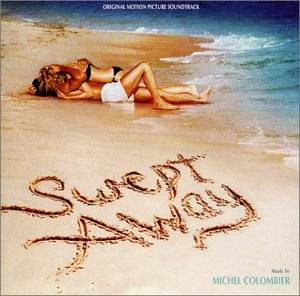 A series of recent viewing has gotten me thinking about the subject of misogyny. When it comes to gender issues things always get complicated. One of my biggest complaints about the vast majority of erudite sexuality essays and gender theories (particularly with regard to film) is that they inevitably oversimplify when they attempt to make a grand statement or prove a definitive theory. Gender politics is always more complicated than it seems, even when you take into account that things are always more complicated than they seem. Starting from this premise, I’m not going to shoot for any climactic revelations, but I will certainly ramble for a bit as a lead-in to tomorrows review of “Craig’s Wife” (1936).

My renewed ruminations on gender issues started last week while I was watching the 1974 “Swept Away” (also known by its superior title, “Swept Away… by an Unusual Destiny in the Blue Sea of August”). From the cheesecake cover art and contrived premise I was sort of expecting something along the lines of a sexier, less-heinous “Six Days and Seven Nights” (1998). For the first third of the film that was more or less what “Swept Away” attempted to deliver: A scruffy communist sailor and a snobby capitalist pleasure-cruiser pass a few weeks hating each other before they are stranded in a small boat and eventually shipwrecked on a deserted island. “I get where this is going,” I sez to myself. “They will fall in love.”

And they do. Except that the sailor starves, humiliates, beats and rapes the woman to get her into submission. She certainly complies rather quickly to his cruelty, becoming his obsessive love slave at the expense of her original personality and former freedom.

My initial reaction was the simple and obvious one. I dismissed the movie as an exploitive art-house attempt to legitimize male sex-power fantasies.

But what really bothered me was that the film was directed by a woman: Lina Wertmuller. Why would she create such a film? Clearly, I needed to dig a little deeper. Here is a list of thoughts that struck me:

1) My understanding and opinion of the film is affected by the gender of the director, though in general (as in conversation) I would try to deny that. If a man had made the film, I would not have bothered to re-evaluate it. That fact, in itself, shows that I’m still very much susceptible to oversimplifying things and jumping to conclusions. I should have given the film more contemplation regardless of the gender of the creators.

2) The film had a clear political metaphor that did not escape me during the initial viewing, but which also did not interest me particularly. The communist/capitalist, rich/poor, oppressor/slave, male/female dichotomies are all tied together rather explicitly. Yet I can’t help thinking that a film such as “Swept Away” has to be viewed at least 50% for its literal story and any symbolic value represented therein can not fully justify or excuse the rest.

3) It is certainly possible to view the film as a critique, a work that exposes the power structures and misogyny that it initially appears to reinforce. I’m always a little skeptical of these types of 180 degree analyses (though there are many valid examples), where the viewer has to arrive at the opposite conclusion of what the film actually depicts. “Swept Away” certainly doesn’t help the audience undergo this u-turn. The first half of the film tries (successfully) to make the woman quite intolerable, presumably preparing us to accept her later punishment as just. The plot reaches certain extremes, but we are not led to believe that anything is really meant to be satiric, surreal or self-aware. The tone of the conclusion is that their rescue, return to civilization and ultimate separation violates their deep love and “natural” male-dominant relationship.

4) A re-evaluation of the film did not make me enjoy the movie much more. It did make me appreciate how complicated the issues involved were and reminded me not to be so reactive, but I found it impossible to shake the basic thrust of my original reading of the film. Many elements of the film were quite well done. For instance, I enjoyed the scenic island locale, the verbal interplay, the lead performances and the conflicting emotions. The film is hardly an artistic failure, but it left a bad taste in my mouth.
Posted by FilmWalrus at 11:24 PM

(I return.) Having not seen this film, I can't comment on your reaction to it, specifically, but I do have something to say on the general subject of gender politics in movies. More a rambling observation (rant?) than anything very constructive, sorry.

It seems to me that academia at large does indeed tend to vastly oversimplify the issue of gender in cinema, almost always whining about the shameful misogyny of the medium at large. The camera stares at women. Women can't have power. Unless they're evil. Or wear glasses. Women in glasses are evil. Or at least unsexy. Last summer I sat through a paper by a visibly astounded (female) scholar exploring the shocking fact that any woman could ever watch, and enjoy, a horror film, considering the apparently proven and accepted misogyny of the genre. According to her findings, women like movies with interesting stories. Shocking.

As a woman, I am sick of this academic crusade on my behalf. Analyses of particular films and trends are one thing, but the sweeping generalizations endemic in gender scholarship are imperfect and unhelpful.

On a calmer note, now that I have that out of my system: your comments here are more balanced and insightful than nearly all of the published papers I've read. I shake you warmly by the hand.

Good to see your return exactly why! I thank you for your high praise and you delightfully succinct summary of the prevailant academic line:

"The camera stares at women. Women can't have power. Unless they're evil. Or wear glasses. Women in glasses are evil. Or at least unsexy."

These basic ideas about how gender in cinema operate have a long, well-researched and highly-accepted tradition, but there is just so so much more to it than abstract theories and generalizations. Most published gender theories don't even acknowledge the limits of their explanations or the potential fallability of their arguments.

I guess it is part of the advantage of writing in a quiet corner of the interent: I can admit to my own status as someone who is learning, exploring, contemplating, evolving and struggling with complicated topics (and often getting it all hopelessly wrong). I don't have to hide behind an academic curtain (though I sometimes do) or propound some woefully inadequate absolute statement in the hopes of increasing my odds of being published.

Your example of horror is one I also deal with. Although I am male, I consider myself "one of the enlightened" and I feel a certain amount of imaginary pressure to object to conspicious gender exploitation out-of-hand. This is frightfully difficult to justify in tandem with my passion for gialli, cult and B-movies. The good news, at least in my opinion, is that the whole situtation provides tons of food for discussion.

Let the ramble continue! Anyone with something to add should feel free to chime in.

Is it time for me to dust off my little Battlestar paper?

Also, at least the actress in the Swept Away remake deserves the scorn.