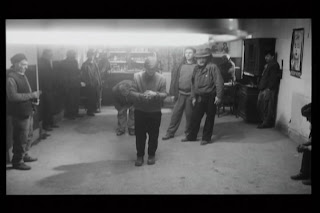 A couple years ago at a small get-together I slipped “Damnation” into my DVD player. I had not seen it yet, but I’d heard good things about the Hungarian director, Bela Tarr. No single act that I have ever executed before or since has killed a party dead so completely.

“Damnation” is a lugubrious gondola ride from purgatory into Hades, with a pall of B&W depression laced with apocalyptic doom. I had no idea what to make of it. Everyone else in the room fell asleep or left within the first couple of shots. In the ensuing silence, I watched the film all the way through and began to appreciate it. I vowed to see another of his films… after a couple of years to recuperate and psych myself up for another go. 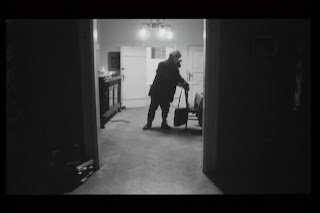 “Werckmeister Harmonies” (2001), sent courtesy of Netflix, has been sitting on my living room table for about two weeks. Twice I tried to start the film and twice I failed. Watching it after coming home exhausted from work with only handfuls of sleep was simply a disaster. I had learned enough to guess that the conditions one views a Tarr movie in can make it or break it. I’m glad I kept at it until I got it right.

The film is set in an economically depressed Hungarian town. Coal shortages have left the icy village without much heat or light. When a mysterious circus sets itself up in the town square, it isn’t treated as a brief reprieve from poverty and unhappiness. Instead, it is whispered about with disgust, fear and anger. Perhaps it’s because the bizarre gypsies are not the sprightly clowns of a colorful big-top, but the keepers of two monstrous oddities housed in a massive corrugated-steel trailer. One is a “magnetic” prince whose unholy exhortations are fabled to incite apocalyptic riots. The other is whale. 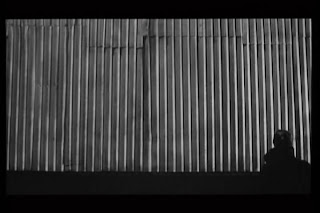 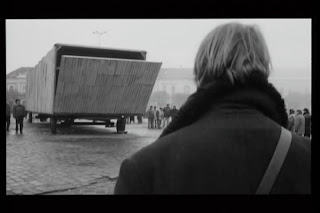 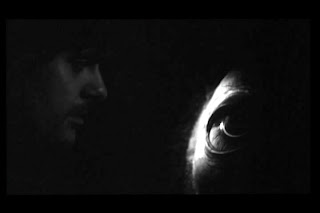 [Images: (Top) The circus trailer arrives in the dead night. (Middle) It opens in the foggy dawn. (Bottom) Janos speaks to the whale as its sightless eye peers out of the darkness.]
Within this hauntingly otherworldly microcosmos is Janos, a slightly whimsical young man whose curiosity and awe are at once refreshing, naïve and doom-laden. He wanders through the town at unidentifiable hours, listening to the rhetorical ravings and oblique harbingers bursting through the tension that engulfs the town. The viciousness and xenophobia of the villagers is directed at exiling the circus, but the movie is no simple exercise is condemning bucolic belligerence. Tarr keeps us on our feet with a rising swell of uncertain symbolism and nightmarish twists. 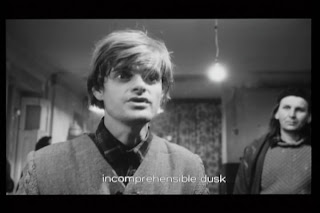 [Image: Janos, our unwitting Virgil on a voyage into East European hell.]
If I’ve made the story seem compelling, I’ve probably been misleading. The real interest, which makes everything about the movie work on deeper and deeper levels, is Tarr’s amazing craftsmanship. The film is a body-taxing, mind-scouring 145 minutes consisting of only 39 shots. For those of you who don’t care to do the math, that’s about 3 minutes and 43 seconds each. I should immediately mention that this is no exercise in simply proving how long you can keep the camera going (“Rope,” “The Russian Ark”), but a genuine attempt to make every single shot a work of art. 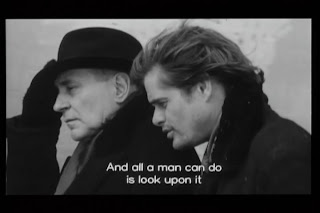 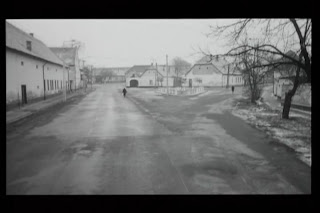 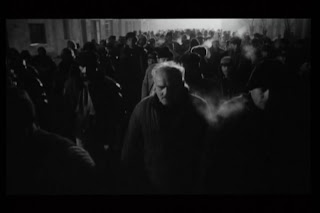 [Images: Never one to chop out the travel between scenes just because other directors consider it boring connective material, Tarr manages to find thoughtful visual variations (characterized by the perfectly choreographed timing of his cast and crew) on even the most mundane of activities.]
The 39 shots of “Werckmeister Harmonies” may make up one of the single densest examples of virtuoso filmmaking available. The cinematography is bleak, but mesmerizing, exquisitely framed and dripping with an impenetrable atmosphere. The camera movement is graceful and yet as restless as the villagers. The editing, what there is of it, is full of visual rhymes and echoes that enhance the sense of mystic unity. Tarr demonstrates his mastery of excruciating beauty, ensnaring us carefully in his blighted town. There are shots in “Werckmeister Harmonies” that overwhelm me with emotions for which I do not know any words. 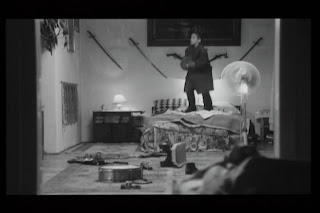 Yet somehow I remain extremely hesitant to recommend this to anyone. Tarr is undeniably brilliant, but he has rowed so far out to sea that he is utterly artistically alone and dauntingly inaccessible. Other members of the art cinema vanguard like Bergman, Lynch and Jarmusch seem inviting next to the challenge of engaging with a Tarr film. The consensus seems to be that Tarkovsky is the only fair comparison.

I have to admit that much of the film is beyond me, including the relevance of 17th century musical theorist Andreas Werckmeister. I’ve heard several rival theories about the film’s central allegory, delivered with the utmost confidence, and yet I remain extremely skeptical of anyone claiming to have wrapped up Tarr’s whale of a work in a nice, neat little package.

Anyone who wants to see this movie ought to do so at their own risk. I offer my suggestion that you try to meet it halfway and the dubious critical tip (which I am beginning to buy into) that it may one day be regarded as a landmark of the 21st century.
Walrus Rating: 9 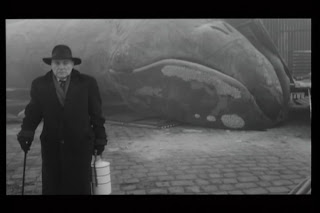 Posted by FilmWalrus at 5:39 PM

This movie might be one foot into the "Eastern European paraplegic faerie lady musical" grave.